Question: What is Historical Truth? 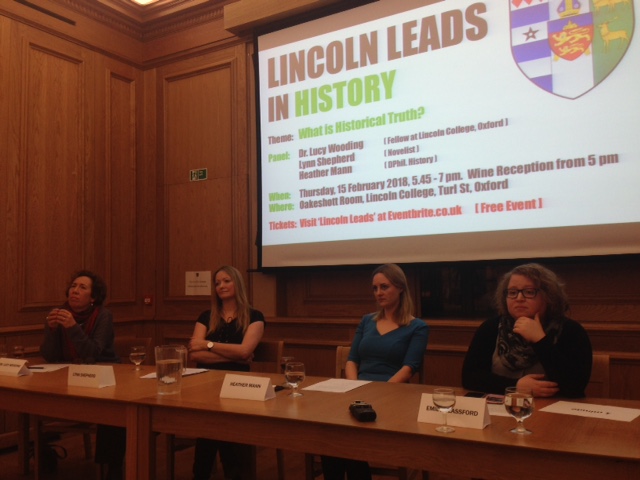 Dr. Lucy Wooding is a Langford Fellow and Tutor in History at Lincoln College. She completed her BA and DPhil in History at Magdalen College Oxford, and she held teaching posts at Queen’s University Belfast and King’s College London before coming to Lincoln in 2016. Her research centres on the English Reformation and the political, religious and cultural transformations which English society experienced between the fifteenth and seventeenth centuries. She has published works on early modern religious identity and Henry VIII, and she is now working on a book for Yale University Press entitled Tudor England. The book aims to integrate political and religious history with insights derived from social and cultural history to offer more provocative approaches to such themes as material culture, landscape and performance.

Lynn Shepherd read English at Lincoln College during the 1980s, returning for a DPhil in 2003. She has been a freelance author since 2000 and specialises in what she terms ‘literary mysteries’, offering a combination of literary fiction, mystery and crime. She has published four novels, drawing inspiration from the lives and works of Jane Austen, Charles Dickens, Percy and Mary Shelley and Bram Stoker. In addition to her novels, she also published an academic book on Samuel Richardson and worked in PR for Guinness, where she created the ‘Water of Life’, a worldwide humanitarian and environmental initiative that has provided clean water for millions of people in Africa.

Heather Mann is currently completing a DPhil in History. Her thesis, ‘Holocaust Memory and its Mediation by Teachers: its Study in Three European Cities’, uses oral history to study teachers’ memory of the Holocaust in Lincoln in Britain, in Aix-en-Provence in France, and Linz in Austria, to study the evolution of Holocaust education, memory and national mythology inside the classroom. Heather completed her Masters thesis at the University of Oxford on the evolution of British Holocaust education and prior to that worked as a secondary school teacher in the UK and Germany. Heather has just completed a work placement in UNESCO where she worked in Education about the Holocaust and preventing genocide.