Question: How do Numbers Shape our Lives? 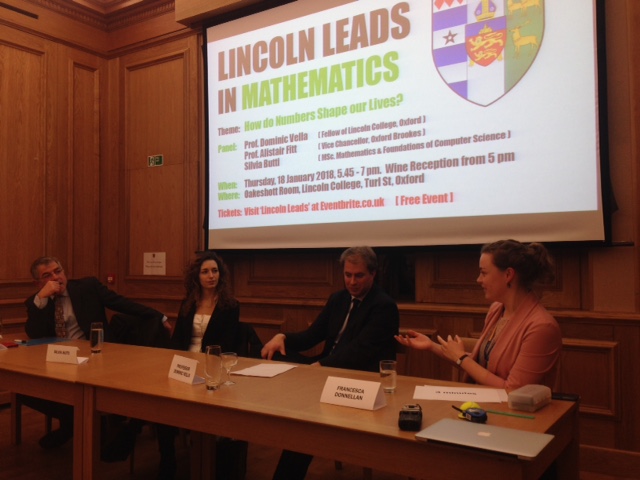 Dominic Vella is a Professor of Applied Mathematics at the Mathematics Institute here in Oxford and a tutorial fellow at Lincoln. He previously studied at Trinity College, Cambridge, before conducting post-doctoral research in Paris and Cambridge. His research interests include solid and fluid dynamics, with a particular focus in the wrinkling of thin elastic objects and surface tension effects. His work has used mathematics to understand a diverse range of scenarios including, but not limited to; developing structures in biological soft tissue; ice berg and ice floe collisions; brain oedema; geological storage of carbon dioxide; and isotype analysis of animal teeth in archaeology.

Professor Alistair Fitt is the current Vice-Chancellor of Oxford Brookes University. He came to Oxford Brookes after 22 years at the University of Southampton, where he held the post of Pro Vice-Chancellor, International, and Head of the School of Mathematics. His work in industrial applied mathematics has two main areas of interest: modelling the flow of glass, food and other complex fluids; and flow and deformation in human eyes. He has published over 90 academic papers and three books including a guide to Online Share Investing in the UK. Alongside being Director of a number of companies, he is the President-elect of the Institute of Mathematics and its Applications, and the Chair of the UK Health Education & Research Policy Network.

Silvia Butti earned her BSc in Pure Mathematics at University College London, and is now an MSc student in Mathematics and Foundations of Computer Science at the Oxford Mathematical Institute. Her research interests span anything to do with metamathematics, from Logic to Computability Theory and Formal Systems. She is also broadly interested in human and machine intelligence, language and cognition.