Question: Will our Children Thank us for Brexit? 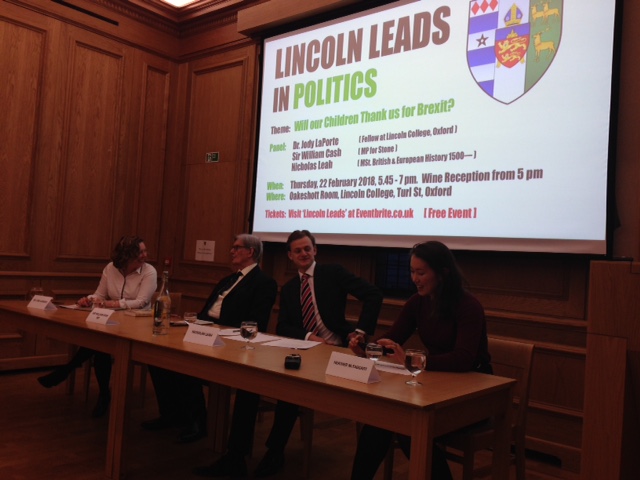 Dr Jody LaPorte is the Gonticas Fellow in Politics and International Relations at Lincoln College, Oxford. Upon completing her BA at Yale University, and her MA and PhD at the University of California, Berkeley, she held lectureships at the Blavatnik School of Government and St. Hilda’s College. Her research focuses on politics and policy-making in non-democratic regimes, with particular attention on post-Soviet Eurasia as demonstrated in her examination of political corruption in Georgia and Kazakhstan in her most recent publication, ‘Foreign Versus Domestic Bribery: Explaining Repression in Kleptocratic Regimes.’ Dr LaPorte also serves as the Director of Studies for the PPE course here at Lincoln.

Sir William Cash has been a Conservative Party Member of Parliament since 1984 and has represented the newly created constituency of Stone since 1997. He graduated from Lincoln College with a degree in history, and after qualifying as a solicitor, began to practice constitutional and administrative law. Throughout his parliamentary career, he has demonstrated his interest in European affairs and the European Union, both in his position as Chair of the European Scrutiny Committee in the House of Commons, a position he has held since 2010, and as Chairman and founder of the European Foundation think tank. He also takes an interest in the developing world as Chairman of the All-Party Parliamentary Groups on Sanitation and Water in the Third World, Malaysia, Kenya and Uganda, and as Vice-Chairman of the All-Party Parliamentary Committee for Tanzania.

Nicholas Leah is reading for an MPhil in British and European History. His research focuses on the imperial lawmaking of Great Britain in the eighteenth-century and the role of individual lobbying groups in shaping British commercial and financial policy. Before studying at Oxford, he graduated from University College London with a BA in History. As an undergraduate, he co-founded the University of London Legal Forum, the first intercollegiate university law society in the UK. In his capacity as President, he organised or chaired panel discussions on topical legal and political issues, including the impact of Brexit, transatlantic trade agreements and human rights law. Nicholas is currently the Guest Liaison Officer for the Oxford Union.